Touted as the successor of the current Gazebo robot simulator (which is commonly used alongside with ROS), we’ll be exploring how to install Ignition Gazebo and the few features it has in this tutorial. With that, let’s begin!

What is Ignition Gazebo?

Ignition is a collection of open source robotics simulation libraries & cloud services for individuals and organizations to simulate or test robots in various scenarios and environment virtually. Although Ignition is still in developments and not all the features have been ported or implemented, it would eventually replace Gazebo in the future. We’ll be looking at Ignition Citadel, which is released on December 2019 as a LTS (long Term Support) version.

Not all the plugins have been ported over from Gazebo, here are some of the new features that Ignition has implemented currently:

More information can be found in their website & here.

We’ll be setting up Ignition on Ubuntu 18.04 along side ROS melodic. The following prerequisites are recommended before commencing on the tutorial.

Xubuntu (a variant of Ubuntu) is recommended for it’s light Desktop environment.

Ensure that rosdep is installed!

As the binary version of Ignition Citadel is available in the osrfoundation repository, we could just download the packages via apt. Before that, we’ll have to add the repo URL and the hash key. (To verify and ensure that the binaries and packages have not been tampered with)

After that, update the repository list and install Ignition.

After that, we’ll be setting up the packages required for Ignition – ROS integration & communication.

This package is to provide a way for Ignition and ROS to communicate together (as a network bridge). As the compiled binaries are unavailable at the time of writing, we would have to compile from source. The following dependencies are required:

After that, create a workspace called ign_bridge_ws in the home directory (~/) & clone the melodic branch of the ros_ign_bridge repository into the workspace.

Return to the parent directory (ign_bridge_ws) and install the following dependencies:

Once all is done, we can compile & install into the workspace. We would also source the setup.bash to tell the system where ros_ign_bridge is located.

Alternatively, you can append it to .bashrc so that you do not need to always source the script before using it.

To run ignition gazebo, you can start it through the Terminal console.

For example, to run the shape demo (shapes.sdf), we could do so via the following command shown below. This would launch the Gazebo server and Gazebo GUI with a world that contains three simple shapes.

To display more information (such as the error, warning, informational & debugging messages), a -v 4 could be appened to the back of the command.

There are a few interesting demos to try out that comes with Ignition simulator, which includes:

Demo of person performing various actions and walking around.

Demo of Quadcopter with ignition::gazebo::systems::MulticopterMotorModel plugin.

Demo of various kind of lights.

But more of these examples can be found in the usr/share/ignition/ignition-gazebo3/worlds directory. Note: If Ignition seems to be stuck or only a black screen is seen, the simulator might be downloading the necessary model(s) from their website. Give it sometime to download, after which it should eventually load.

Moving on, we would be trying out some examples on the ROS-Ignition Bridge communication.

Getting camera feed from Ignition

We’ll be opening a few terminal consoles to test out the examples:

Let’s start with Ignition 1st by launching camera_sensor.sdf, with -r parameter to run/play the simulation once it has started:

This example would run & publish the camera feed via /camera topic. Press on the orange refresh button to display the camera view if it is blank/white.


Opening a new console, we would check if the topic is being publishes. To do so, we can use the ign topic command: 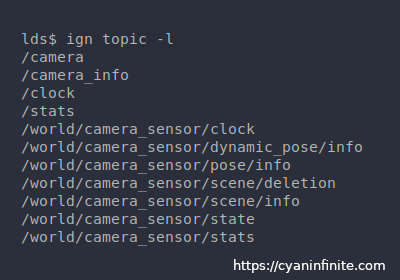 
In a new console, we would run roscore:


Opening another console, we would run ros_ign_bridge to bridge the communication to ROS:


Opening the last console, we would display the image feed from the camera. To do so, we can use the rqt_image_view command: 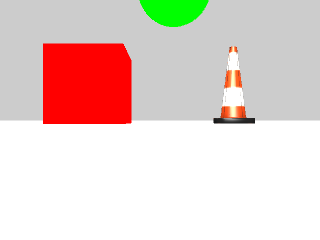 More examples could be found in the ros_ign_bridge repository:

To remove Ignition, it would be similar to removing regular ubuntu packages: