As certain projects do not utilize all the GPIO pins on the Arduino uno board, one could look at a smaller and cheaper microcontroller chip such as the ATtiny 85 instead to suit one’s need. With that in mind, projects could be  miniaturize by using the ATtiny-85 chip. Side Note
The following posts were merged:

The post would be seperated into 2 main themes: firstly an introduction to the chip (including how to program the chip, etc.), followed by a few relevant projects that utilizes this particular microcontroller chip.

In this tutorial, I will be showing you how to use the Arduino Uno as the programmer & arduino software to program the ATtiny85.

ATtiny is another series of Atmel 8-bit Microcontroller chip, which include chips such as ATtiny-45, ATtiny-84,etc. For the ATtiny85, it consists of 8 pins (5 of the pins which could be utilized for programming). As the power requirement of the chip ranges from 1.8V to 5.5V, this means that you can power the ATtiny with only a button cell / battery. Furthermore, it is re-programmable, which means that you can reprogram this chip for other projects! The ATtiny is actually very similar to the arduino board since both are from Atmel (which is bought over by Microchip), except that it has lesser GPIO (General Purpose Input/Output) pins.

The image below shows the pin configuration of the ATtiny85:

Why use ATtiny85 instead of normal Arduino board?

We would be using an Arduino Uno as an ISP (In-System Programmer) to upload the program into the ATtiny85. (Other micro controller boards or programmer could be used for more advance users.) Uploading the sketch to ATtiny85 The above table shows you how the jumper wires should be connected if you don’t understand the above schematic. For example, for the first row, what the table means is to connect the Arduino Uno 5V pin to ATtiny pin 8. (Which is ATtiny Vcc pin.) Check that the connections should be similar to the set-up below: 4) Download the ATtiny files here. Extract the folders. Rename the attiny folder (not the attiny-master folder) into “hardware”.

5) Locate your arduino sketchbook location. (Which will most likely be in your documents) Copy & paste the “hardware” folder into it. Restart your Arduino IDE.

7) Let’s upload a simple program into the ATtiny to test out whether the ArduinoISP is able to program the ATtiny85.

Press upload. After the upload have completed, you may see 2 errors:

You should not be worried about this error, as this tells you that the ATtiny has successfully been programmed. Plug in a LED to pin 5 of the ATtiny 85 (labelled as pin 0) and connect the negative side to pin 4 (GND). It should start blinking at 1Hz.

NOTE: The ATtiny85 chip doesn’t support all the functions that the UNO does (since it’s smaller), but it supports the following:

For more detailed explanation of each steps, visit highlowtech.org, since the steps are based on that website.

Time to use a tiny OLED screen with a ATtiny85 to display something! This is useful in displaying relevant information such as graphics and sensor values. In this tutorial, we’ll be going through on how a I2C 0.96″ OLED Display could be interfaced with the ATtiny85. As information on interfacing the ATtiny85 with the I2C display is scarce, this tutorial would hopefully equip one with the necessary information and knowledge on how to go about doing so.

Why use a small OLED Display?

OLED Displays do not require much power to turn it own, since no backlight is required to read the display. Furthermore, ATtiny projects do not need to have such a large screen to display all the value, and the screen of this size may be enough. Finally, with a small screen, you can make your ATtiny projects even more compact!

Which Library am I using?

For this tutorial, I’m using the Tinysaur ssd1306xled library for displaying the text on the OLED Display, as that is the only library I think is small enough to display text on the ATtiny85, although there are limitations such as there is ony 2 sizes of fonts,etc. The tinsaur library can be downloaded here.

I wanted to use the Adafruit ssd1306 library at first, for it has many graphical options such as drawing shapes and lines, but I realised that the library was too big for the ATtiny85. Therefore, I have to find a smaller library. And that is when I found the TinySaur ssd1306xled library.

I used the Tinysaur Library for this project. I changed the F_CPU constant from 1000000 to 8000000. The F_CPU constant is actually to be changed according to what speed your ATtiny is clocked. At 1000000, the flickering or the screen refresh is too obvious, so increasing the CPU clock to 8000000Hz would reduce the flickering display. To do this, you have to burn the 8MHz bootloader (to tell the chip to run at 8MHz instead of the default 1GHz).

Through beam sensor with Digispark (ATtiny85 USB Development Board)

Through beam sensors can be used for a variety of applications, which include counting objects, number of steps move, etc. In this post, we will be looking at how do one interface this sensor with Digispark (ATtiny85 USB Development Board). Digispark is a development board assembled with the ATtiny85 chip, the relevant components (such as voltage regulator, resistors, etc) and (most importantly a) USB connector, which makes programming the ATtiny85 easier. (This helps to save some effort and time compared to using a programmer to program the ATtiny85, but the only drawback is that the voltage supply is fixed by the voltage regulator onboard) For the Digispark, it comes loaded with a Digispark bootloader, allowing user to program the ATtiny85 directly by plugging the board into the USB port. Below shows the pinout of the Digispark. The Beam photoelectric infrared Sensor is a beam through sensor, which means that whenever an object passes through the sensor, the sensor output state will change accordingly. For this sensor, when the sensor is obstructed, it outputs a digital HIGH. Otherwise, it will output a digital LOW. The simplified workings of this sensor would look something like this, where OUT is the output pin.

Below are the parts required for this tutorial:

Before commencing on the main objective, we first have to setup the Digispark. As the computer would not recognise the Digispark when you plug it in, we have to install the USB driver for it. To do so, download the following package here (Select the DigisparkArduino-Win32-1.0.4-May19). Extract the contents.

and run InstallDriver.exe to start installing the USB driver.

In the preference, insert the following link in the Additional Boards Manager URLs and click OK.

After installation, goto Tools > Boards again, but this time we would select the Digispark (Default – 16.5mhz) option. This is to tell the Arduino IDE that the board we will be using is the Digispark board.

Before uploading the sketch, unplug you Digispark first. Next, press the upload sketch button & wait for it to be compiled. When the console/log at the bottom of the Arduino IDE displays Plug in device now…, plug the Digispark back in.

If the status shows Micronucleus done. Thank you! , it means that the program has successfully being uploaded.

With that, let’s move on to interfacing the sensor with the Digispark.

NOTE: Apparently, the Digispark can only be detected using only USB2.0, so if you plug it in a USB 3.0 port, the computer may not be able to detect the Digispark.

Below are a few images of how the connection should look like:

A short demo of the code. 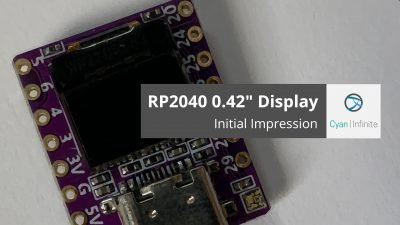